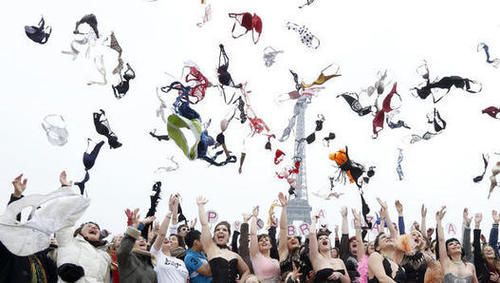 Last year, a researcher found that bras reduce breast tissue strength in young women, causing their breasts to sag more over time. Unlike earlier studies, this one had a decent sample size (n=330) and good longitudinal followup (15 years). Notable results:

* Women who did not wear bras had a 7 millimeter lift as measured from their nipples each year.

* Bra-less women had firmer breasts and their stretch marks faded.

* There was also no evidence that bras reduced back pain.

This reminds me of how 150 years ago, many physicians still “felt corsets were a medical necessity because of women’s biology and the needs of civilized order.”

Once it became obvious that corsets were incredibly bad for women’s health, fashion designers moved on and created the modern bra. It’s somewhat telling that it took researchers another 80 years to check if bras offered any of the health benefits that marketers in the multi-billion dollar industry had been claiming (e.g., back support, sag prevention, etc), only to find that the answer was once again “No, and bras are detrimental too… just like corsets”.

Of course, the intuitive need for bras among current users is strong. The longer a woman has been supporting her breasts using bras instead of her own strength, the weaker the tissue needed for natural support becomes, creating a vicious cycle of increased “need”. It’s the same as with other cripplingly addictive medical products, like medicated lip balms — which create increased need for more lip balm by sealing lips inside thin layers of moisterizer but with added drying agents like menthol and camphor that leave their users worse off than before they used them in the first place. Addicts then need daily re-application to get even temporary relief in their downward spiral of drying lips (that is caused by the product itself).

And before anyone suggests that “Tribal African Women” Are Proof That Breasts without Bras Sag, it should be noted that actual researchers who have studied this explain it by way of multiple pregnancies and heredity, not lack of bras.